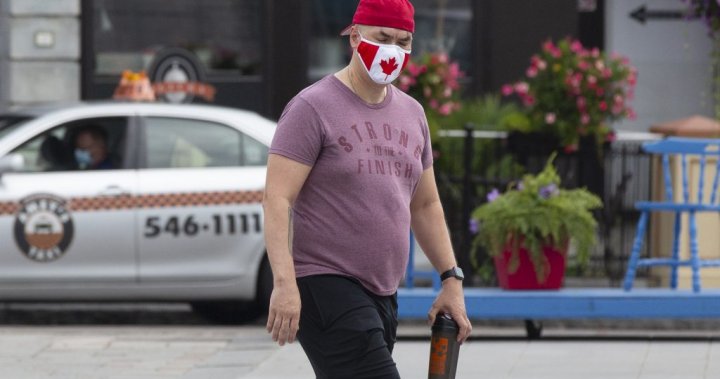 Canada reported 289 new confirmed cases of the novel coronavirus Tuesday, the lowest daily total in over a month and continuing the latest downward trajectory in the country’s pandemic curve.

The national total now stands at 120,363 cases that have been confirmed by laboratory tests. The death toll has reached 8,991 people, after four more patients died over the past 24 hours.

Read more:
How many Canadians have the new coronavirus? Total number of confirmed cases by region

Monday’s low number was primarily thanks to Ontario, which only reported 33 new cases, the lowest daily total for the province since the early stages of the pandemic in mid-March. There have now been 60,718 cases in the province, with 2,786 deaths.

Quebec is also seeing a downward trend, with 91 new cases marking the second day in a row that health officials reported less than 100 daily infections. The province remains the hardest-hit by the pandemic, however, with 60,718 total cases and 5,697 deaths. One of those deaths was reported Monday.

3:23Growing concerns about classroom sizes amid the pandemic

Growing concerns about classroom sizes amid the pandemic

While Manitoba saw its lowest daily count in a week with four new cases — bringing its total to 547 confirmed cases plus 15 considered probable, with eight deaths to date — the rest of the western provinces continued their upswings.

Saskatchewan shot up by 29 new cases to a total of 1,479, after the past two days saw single-digit increases. Twenty people have died in that province so far.

In Alberta, 85 new cases brought the province’s pandemic curve back up after Monday’s record-low increase of just 48 infections. Three new deaths were also reported, for a total of 216 fatalities out of 11,772 confirmed cases to date.

British Columbia is continuing to see a rise in daily cases, with 46 more reported Tuesday. The province has now seen 4,068 confirmed cases, plus an additional 43 that are “epidemiologically linked,” meaning they are connected to confirmed cases but have not been confirmed through testing themselves. The death toll stands at 195, with no new fatalities in nearly two weeks.

Read more:
What we know (and don’t) about Russia’s new coronavirus vaccine

New Brunswick confirmed its first new case in nearly a week, bringing its total to 177 cases, two of them fatal. None of the other Atlantic provinces saw new cases Tuesday.

The three territories also saw no change to their case totals. Nunavut remains the only jurisdiction in Canada without any cases.

On Tuesday, Canada’s chief public health officer Dr. Theresa Tam expressed cautious optimism about the arrival of a COVID-19 vaccine, but maintained Health Canada would not rush the approval of a candidate in a way that compromises Canadians’ safety.

The comments came after news broke that Russia had approved the world’s first such vaccine, despite Moscow appearing to have skipped a traditional third phase of widespread testing and not publishing any scientific data to back up claims of the potential vaccine’s effectiveness.

Tam warned last week that getting a vaccine approved won’t be a “silver bullet” to stop the pandemic because approval is just the first step. She said Tuesday the success of any approved vaccine will depend heavily on getting Canadians to take it.

Last week, Canada signed deals with two vaccine developers, Pfizer and Moderna, to get access to millions of doses of their experimental vaccines if they succeed at phase three trials and are approved by Health Canada. The earliest either is expected to arrive in Canada for use in patients is next winter.

The race for a vaccine has intensified around the world along with the spread of the pandemic. Monday saw global confirmed cases reach at least 20 million, after taking just six weeks to climb from 10 million reported infections.

Experts say the true number of cases could be up to 10 times higher than officially reported by public health and government agencies, as testing shortages that were widespread at the start of the pandemic continue to plague several countries.

The United States remains the most infected country on Earth with over five million confirmed cases and over 164,000 deaths, according to data from Johns Hopkins University.

Brazil and India, which round out the top three, have another five million cases between them.

— With files from the Canadian Press

Facebook
Twitter
Pinterest
WhatsApp
Previous articleHenry Ford Health System’s use of CarePort during COVID-19 improves care decisions
Next articleMom Donates 500 Oz. of Breast Milk After Son Dies from Rare Condition: ‘It Was a Sense of Healing’

Médecins Sans Frontières to operate in Canada, assist with Toronto homeless amid COVID-19

Humanitarian aid organization Médecins Sans Frontières (MSF) will be operating for the first time within Canada when it provides assistance to homeless Torontonians amid...
Read more

Jawbones and Fitbits are fine, but there are still some health insights that your own brain figures out better. Like this one: How did...
Read more

Penn Medicine is getting new money to assess how its COVID Watch remote patient monitoring program is serving its patients, particularly those in Black...
Read more

Claims that the coronavirus pandemic originated in a laboratory in the Chinese city of Wuhan have no basis in fact, the head of the...
Read more

Summer Is Coming, but the Virus Won’t Be Going

“Everybody hopes for seasonality” when it comes to the coronavirus pandemic, Peter Juni of the University of Toronto acknowledged. Maybe, just maybe, the summer...
Read more

WASHINGTON — A man in his 50s tested positive Saturday for coronavirus — the first presumptively confirmed case in the nation’s capital — and...
Read more