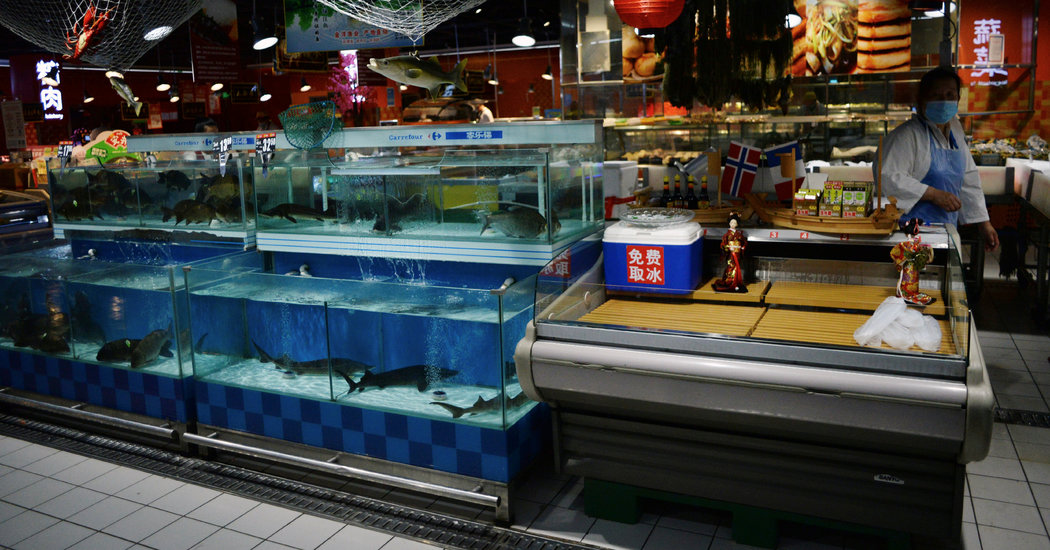 When a new coronavirus outbreak emerged last week in Beijing, residents were jolted by reports that traces of the virus had been found on a cutting board used for imported salmon, and the backlash was swift.

Within a few days, salmon was removed from major supermarket shelves in Beijing, reserves of the fish were dumped and bulk orders evaporated. Diners rushed to cancel reservations at Japanese restaurants in the capital, while salmon suppliers around the world scrambled to salvage the tarnished reputation of their prized product in the country. Chinese officials later said that imported salmon was not responsible for spreading the virus, but the damage had already been done.

“The unluckiest restaurateur of 2020,” said Alan Wong, owner of Hatsune, a chain of Japanese restaurants in Beijing and Shanghai. “That’s my title.”

“We were packed on Friday and now dead ever since,” he said. “Totally empty.”

In a country where fears of the virus remain strong and nationalism is on the rise, imported salmon has found itself an easy target.

Facing global criticism for its initial mishandling of the virus, Chinese authorities have for months waged a propaganda campaign to highlight their successes in taming the virus and deflect blame for the pandemic to outsiders. They have cast foreigners as public health risks, sowed doubt about the origins of the virus and even pushed an unfounded conspiracy theory that the United States military had deliberately brought the virus to China.

After the chairman of the wholesale market linked to the latest outbreak told a Beijing News reporter that the virus had been found on a cutting board used for salmon, panic ensued. On Saturday, Zeng Guang, a senior epidemiologist at the Chinese Center for Disease Control and Prevention, was quoted in the Global Times, a party-controlled nationalist newspaper, urging the public to temporarily stay away from raw salmon.

For years, China’s growing appetite for salmon, like American lobsters, oysters and cherries, had been celebrated as a sign of the country’s rising living standards and burgeoning middle class. Now, the luxury good, which is mostly imported from Norway and Chile, is being cast out.

On Thursday, Chinese health officials said that the seafood and meat sections of the Beijing wholesale food market linked to the outbreak had been found to be seriously contaminated with the virus, and that low temperatures and high humidity there may have contributed to the spread.

For the many salmon suppliers and restaurateurs who were already struggling to claw their way back in the aftermath of the pandemic, the sudden boycott in China has dealt an unexpected blow.

Like many other restaurant owners in China, Mr. Wong of Hatsune was forced to close several of his fifteen restaurants after the epidemic exploded in the country in late January. The remaining restaurants were beginning to return to pre-pandemic levels of business earlier this month. Then reports began circulating last Friday about the contaminated cutting board, and the customers stopped coming.

Halfway around the world, the reports also delivered a seismic shock. Regin Jacobsen, chief executive of Bakkafrost, a salmon farming company based in the Faroe Islands, said that calls from China to cancel orders began coming in over the weekend and soon they “practically went from 100 percent down to zero.”

Over the last decade, Mr. Jacobsen said, the market for salmon in China had grown with the increase in Japanese restaurants and the expansion of a Chinese middle class interested in reaping salmon’s health benefits. Up to 20 percent of Bakkafrost’s fresh salmon exports, he said, went to China every year.

After seeing the mounting cancellations, Bakkafrost rushed to respond, putting out a statement emphasizing that there had been no new cases of the coronavirus in the Faroe Islands since April and that the company’s employees had been regularly tested for the coronavirus.

Anders Snellingen, manager of global operations for the Norwegian Seafood Council, an industry group, said that Norway’s seafood companies had also seen a rapid uptick in cancellations for salmon orders from China over the weekend and that several shipments of salmon had been destroyed or returned. On Thursday, the council said Norway’s salmon exports to China had fallen by a third last week.

“We hope this can be resolved quickly,” said Mr. Snellingen. “In the very short term we see there might be logistical challenges to getting seafood in via Beijing.”

It is not the first time that Norwegian salmon has been made collateral damage in China. In 2010, the Nobel committee, which is based in Norway, awarded the Peace Prize to pro-democracy dissident Liu Xiaobo, angering the Chinese authorities. Beijing responded in part by slapping import controls on Norwegian salmon that were so strict that much of the fresh fish reportedly ended up rotting in Chinese warehouses. It took six years for Norway and China to normalize relations, and salmon sales began to recover.

Last year, Norwegian salmon accounted for 45 percent of the market in China, according to the Norwegian Seafood Council. The total value of the country’s salmon exports to China last year reached $167 million and was growing, Mr. Snellingen said.

The new outbreak, which has so far sickened more than 150 people in Beijing and forced the closure of workplaces, restaurants and hotels in high-risk areas of the city, comes at a delicate time for China’s leader Xi Jinping. Official data released this week showed that authorities are still struggling to rev up the country’s economy. Abroad, the ruling Communist Party faces a growing international backlash for its initial attempts to downplay the epidemic.

“Given all of the effort they put into protecting Beijing, the fact that they let the virus slip through their formidable capital defenses is a bit of a blow to the Communist Party,” said Drew Thompson, director for China in the Pentagon from 2011 to 2018 and now a research fellow at the Lee Kuan Yew School of Public Policy in Singapore.

“Blaming this on foreign forces that got through their screen is a palatable option for them,” he added, calling the backlash against salmon a form of “xenopescophobia, the fear of foreign fish.”

In Beijing, concerns have spread beyond salmon. One vendor at Jingshen market, which processes much of the city’s seafood, said in a telephone interview that he had seen sales of all seafood drop by 80 percent since Friday, though he was optimistic that demand would eventually rebound.

In the last few days, state media and health officials have started to walk back their earlier statements about salmon. At a news briefing on Tuesday, Shi Guoqing, an official from the Chinese Center for Disease Control said that there was no evidence to suggest that salmon could host the new coronavirus.

Officials, however, have not ruled out the possibility that the seafood products could have been contaminated during the packaging process.

Norwegian officials said on Wednesday that together with Chinese authorities, they had concluded that salmon from Norway was not the source of the coronavirus found on cutting boards at the Beijing market.

“We can clear away uncertainty,” Odd Emil Ingebrigtsen, Norway’s fisheries and seafood minister, said during a video conference.

Despite the official reassurances, many Chinese diners were still hesitant. Alyssa Mai, 19, a college student from Guangzhou, said that while she knew the risk of getting the virus from eating salmon was low, she would not have it any time soon. “My relatives would be worried,” she said.

Some Chinese researchers and state media have zeroed in on a finding that the virus in the latest outbreak most closely resembles what they described as a “European strain.” They have cited it as the latest reason to question whether the virus originated from Wuhan. On Monday, the headline of a story in the Global Times read: “Source of Beijing cases renews speculation over Covid-19 origin.”

Other experts said that the speculation over the virus strain was misleading.

“It clearly emerged in Wuhan,” said Ben Cowling, a professor and head of the division of epidemiology and biostatistics at Hong Kong University’s School of Public Health. “In the media in China they are saying it’s a European strain but they haven’t clarified that it’s the virus that came from Wuhan and went to Europe and then came back again.”

As Beijing reverts to a partial lockdown, many restaurateurs like Li Kuan are finding it harder to be optimistic about the future. Mr. Li had been forced to suspend business at his 30-seat, high-end Japanese restaurant during the height of the epidemic but bookings quickly bounced back in May as restrictions were lifted.

But since Friday, the intimate, earth-toned restaurant in eastern Beijing has been nearly empty. Mr. Li said he was reluctant to close the restaurant because he didn’t want to give in to the misinformation. But, he was struggling to stay afloat — he had already sent half of his staff home and was sitting on a rapidly expiring stock of fresh tuna and salmon flown in from Japan.

“I’ve been a chef for so many years, I can’t just give up now,” Mr. Li said. “But right now the problem I’m thinking about is just: when is this going to end?”

Why has B.C. handled the pandemic better than other provinces?

B.C.’s first confirmed case of the novel coronavirus was announced in late January. Since then, the province has had around 2,800 cases of the...
Read more

Six U.S. states have entered a pact to reduce testing times. About one-third of Afghanistan’s population, or roughly 10 million people, have probably been...
Read more

An ‘Unprecedented’ Effort to Stop the Coronavirus in Nursing Homes

The coronavirus crept into Heartland Health Care Center, a nursing home in Moline, Ill., on the last day of July, when a member of...
Read more

The U.S. government late on Friday accused the Chinese government of making it impossible for U.S. airlines to resume service to China and ordered...
Read more
Load more

Frustrated by a nationwide testing backlog, the governors of six states took the unusual step of banding together on Tuesday to reduce the turnaround...
Read more

The new coronavirus has directly caused the death of 9 out of 10 of Italian COVID-19 victims, a study released on Thursday said, shedding...
Read more

‘Femtech and women’s health issues have become more mainstream. We must do more though’

Navigating the obstacles of reproductive health life stages can be a challenging journey for many women that is often shrouded in taboo. Femtech has played...
Read more